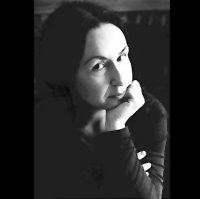 Nadine Ribault (1964–2021) was born in Paris and travelled a great deal during her childhood, to Africa, Holland and Scotland. She obtained a BA in French literature at La Sorbonne in Paris, then taught French in the Lorraine region in France. Ribault then went on to spend several years in Japan, teaching French language and French literature. It was during this time where she wrote a great deal and was involved in organizing lithographies exhibitions.

Ribault now lives in the North of France, on Côte d’Opale. Her first book of short stories Un caillou à la mer was published in 1999, and her first novel Festina Lente in 2000.

The next collection of short stories, Coeur Anxieux was written in New Zealand during her time at the Randell Cottage. The collection Un caillou à la mer has been translated in English by Jean Anderson (a Trustee of the Randell Cottage) under the title A pebble in the sea. She has recently published Moments Littéraires, a short story in which she describes her meeting with Janet Frame in Dunedin. Ribault is married and has a daughter.