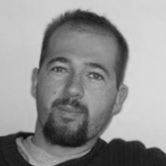 Olivier Bleys was born in Lyon in 1970. He holds masters’ degrees in modern literature, computer graphics and cultural project management. Author of historical novels as well as essays and travel stories, Olivier won the young novelist’s prize for The Island at the age of twenty-two. Three years later his second book, The Prince of the Fork, received a national prize. His third novel, Pastel, was translated into several foreign languages and rewarded by the French Academy.

His most recent novel is The Ghost in the Eiffel Tower (2004). Olivier’s novels have been translated into eight languages.

Olivier Bleys is currently researching and writing his first contemporary novel which will be set in the South Island of New Zealand. It involves an astronomer, a meteorite and an art exhibition.