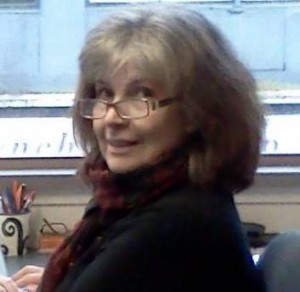 Mary McCallum is a publisher, poet and author.  Her children’s novel  Dappled Annie and the Tigrish (Gecko) was published in new Zealand in February 2014 and will be released in the United Kingdom and United States in Autumn 2014.  Her first novel, The Blue (Penguin 2007), won two Montana NZ Book Awards (Best First Book of Prose & Readers’ Choice) and she is currently working on a second novel.  Mary has also been a long-serving chair of the Friends of the Randell Cottage.

I walk in on them, four poets eating scones, plates

balanced on their laps, cups in hand, caught like

teapots in a cupboard. That room, once the singing

room, once  a bedroom for spinster sisters,  built

in a time of family bibles and blue-glass bottles.  Now

and poets of some standing, sitting at odd angles,

protruding an elbow – an ankle – a knee, swallowing

shifting from the blocked fireplace, to the blank

ceiling, not one letting on that the air is constricted, that

they’re the wrong sized dolls for this doll’s house, that

the chimney creaks. Do they know or do they guess?

In the quiet cavity above, a child’s clothes were found.