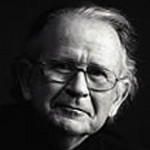 Vincent O’Sullivan is an author, poet, dramatist, and Katherine Mansfield scholar. Emeritus Professor of English at Victoria University of Wellington, he is also a trustee of the Randell Cottage Writers Trust. This poem, The hare he said, will be included in Being Here: Selected Poems to be published by Victoria University Press in 2015. Vincent was appointed New Zealand’s Poet Laureate in 2013.

The hare, he said

‘You can’t imagine what it was like, to see a creature
other than rats,’ to see, he meant, its living pertness,

its ears alert and standing and the sun pink through
them, ‘a kind of warmth we’d as good as forgot.’

Its odd, insistent confidence, its paws casual
even, between coiled snagging wire as if

mere brambles, not a dozen yards to the left
a corpse-infested ditch. He said, ‘We watched

him with childish wonder, as though an angel
had landed at an atheists’ picnic,’ a Methodist

as he’d been then, wryly thinking back. ‘And no one,
none, the hare, the angel, the bleeding enemy,

us, knowing who would disturb it first, who’d
regret forever wrecking its undamaged world.’

Who did? He couldn’t tell you. ‘The one fine thing,’
he said, ‘that was worth remembering. The hare.’