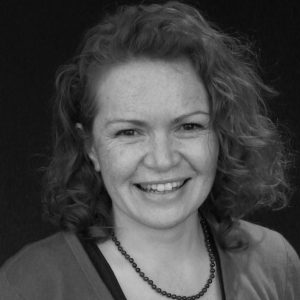 Tina Makereti is the author of two books: a novel, Where the Rēkohu Bone Sings (Vintage 2014), and a short story collection, Once Upon a Time in Aotearoa (Huia Publishers 2010), which won the Ngā Kupu Ora Māori Book Awards Fiction Prize 2011. In 2009 she was the recipient of the Royal Society of New Zealand Manhire Prize for Creative Science Writing (non-fiction), and in the same year received the Pikihuia Award for Best Short Story Written in English. In October 2012 Tina was Writer in Residence at the Weltkulturen Museum in Frankfurt, and in 2013 she was Curator-at-Large for the New Zealand Film Archive. Tina has a PhD Creative Writing from Victoria University, and teaches creative writing at Massey and Victoria Universities. She is of Ngāti Tūwharetoa, Te Ati Awa, Ngāti Maniapoto, Pākehā and, in all probability, Moriori descent. She usually lives on the Kāpiti Coast with her partner, daughters, unruly dog, and three bossy chickens.

Tina’s project is an historical and allegorical novel based on the experiences of the indigenous people, in this case, a Māori child, who were exhibited in Victorian London, and elsewhere in Europe, as cultural artefacts and oddities. She’s planning a first-person narrative which will explore the dehumanisation and loss of dignity involved.