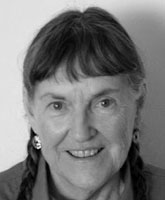 We were saddened this week to hear of the death of Beryl Fletcher, who was the Cottage’s New Zealand resident in 2006. Beryl came to fiction writing later in life and did so with a bang: winning the 1992 Commonwealth Writers Prize for Best First Book in the Asia / Pacific region with The Word Burners. She went on to write four more works of fiction and memoir, The House at Karamu.

In 2012, to mark the Cottage’s 10th anniversary as a writers residence, a team of trustees and Friends, led by Jean Anderson, collected and translated short texts from the Cottage’s residents. Writers were asked for a memory, a reflection, an extract from a work written at the Cottage: for something that captured their experience of that period in their career.

Beryl sent us the following. Farewell, Beryl, you will be missed.

We arrive at the cottage at dusk. My partner Mike has accompanied me on the train from Hamilton. Anne Faulkner, the secretary of the trust, gave us a warm welcome.

The cottage is brilliant, haunted of course, but how could it not be? My ghost is a young girl who is dressed in a pinafore and a large floppy satin bow. She serenades me from the garden with cascades of musical giggles. Alas, she disappeared soon after Mike’s departure.

Wellington has the feel of a foreign city to me. The weather is like a living breathing animal that can change its mood in a second. Behind the cottage is a sharp and brooding mini-mountain covered with dead trees cut down to allow some light to fall on an old house below.

I have a large extended family back in Hamilton. It is strange to be alone down here. I realise once more how difficult it is not to mediate, filter, test everything you think and feel through another person.

I fear that I will learn to love being alone too much.

Milo the cat who lives next door visits me but I have to be careful not to trip over him. I wonder if my hip will survive the daily walk over the botanic gardens to the cable car. Each day is structured. I can only write in the morning. I get up at six, work until lunch time then down to Lambton Quay for shopping.

I love this little cottage. I wonder about the women who have lived here. The bookshelves held some printed booklets about their history. Harriet Randell coached her singing pupils in the sitting room. One night, I swear I heard someone singing ‘Danny Boy’ accompanied by Harriet on the out-of-tune piano.

I stand at the old Shacklock coal range and feel the presence of Sarah Randell and am overwhelmed and daunted by the enormous domestic labour that was the centre of her life.

It was a privilege to live and work in Randell Cottage.