Melbourne-based but Wellington-born, writer, reviewer and editor Michalia Arathimos will be returning to her home city next year as the 2020 Creative New Zealand Randell Cottage Writing Fellow. Arathimos will be using her time at the Randell Cottage to work on her second novel, Cartographia, which she describes as an exploration of place, migration and identity, through the eyes of a woman of Greek descent.

Arathimos has published work in many places, including The Lifted Brow, Overland Magazine, Landfall, Sport and Headland. She was twice short-listed for Australia’s Overland VU Short Story Prize and won 2016’s New Zealand Sunday Times Short Story Prize. Her first novel Aukati was published in 2017 by Wellington’s Mākaro Press. Arathimos holds a PhD in Creative Writing from Victoria University’s IIML and is currently fiction reviewer for the Melbourne-based Overland Magazine.

Selection panel convener Stephen Stratford says “It was a mast year for applications for this valuable fellowship – in quality and quantity – but Michalia’s application stood out and was the panel’s unanimous choice. Her writing sample sang and the residential aspect of the fellowship will clearly be of benefit to a project which draws from Michalia’s own experience growing up in Wellington’s Greek community.”

Arathimos says she is delighted to be the 2020 resident and is looking forward to her six months in the capital.

“Wellington, with its hills and fault lines and glittering sea, is like a perfect espresso cup of culture and energy. It’s also home to a lot of quiet minorities, like the Greek community I come from, who carry stories that might be less well known than others. I can’t wait to return.”

With just a couple of weeks of her residency left to run, Paddy Richardson took time out to chat with RNZ National’s Lynn Freeman of Standing Room Only. 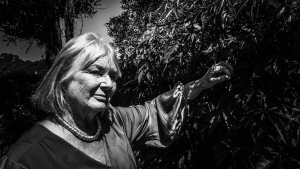 2019 New Zealand writer in residence Paddy Richardson has been using her time in the capital to visit Matiu Somes Island, the major setting of her novel in progress, The Green of the Spring.

She’s made several day trips but in November, along with her husband Jim Mackay, stayed for three nights, and says the Randell Cottage residency, “has been invaluable in the opportunities for research and visiting the island.”

Paddy’s writing achieves an extraordinary sense of time and place. Her book Swimming in the Dark transports the reader to Central Otago, with resonances from post-war Germany under the Stasi. Cross Fingers is a crime story that takes us inside the world of the 1981 Springbok Tour protesters. And her latest novel Through the Lonesome Dark set in the West Coast town of Blackball, brings small-town relationships to vivid life, just as it recreates the horrors of trench warfare and the fears of miners drilling under Arras in WW1 France.

Now we wait to – through Paddy’s imagination and research – the harsh internment camp established in the same era on Somes Island in the isolation of Wellington Harbour, through the eyes of Otto Bader, a young mining activist of German heritage. The new book is close to being finished and should be published in 2020. 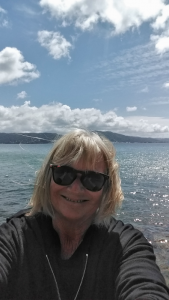 Paddy says the water was rough and cold for the journey across to Somes. She was especially struck by the wind: “It was incredibly powerful – and the sound of it. It reminded me that there was a rule that the men were not able to remain inside their barracks during the day – imagine being constantly out in those conditions. The prisoners built their own shelter huts as a result. And the men had to carry their water up from the jetty every day – gallons of it – buckets carried on a yoke across their shoulders. Imagine battling against the wind carrying that kind of burden.”

On returning to her base at Randell Cottage, only a short distance from the harbourside, Paddy reflected on the nearness of Somes to Wellington: “It must have been a constant torment, the city was close and yet they were so isolated.”

Paddy has shared a tantalising extract from The Green of the Spring in which Otto makes his own journey to the island:

When we had come up on deck, I’d been able to see Somes in the distance as a rising shape near to the horizon but now we were approaching it I could make out a long shore with craggy, low rocks to one side and a high rounded rise at the centre. It appeared smaller than I had envisaged, though I imagined it would spread further on the other side of the island that we could not see. Apart from a small group of figures I could make out on the wharf, there seemed no sign of life. I’d heard there were over a hundred men incarcerated there, as well as the overseeing military. I wondered how all who lived there could be accommodated in such a small place. The pleasure I had initially taken in the enclosure of sea, harbour and hills changed to a mild sense of panic. A hundred or so men sealed off on a small island? How would we pass our time?

On a gloriously sunny day, under the auspices of Wellington Heritage Week, the three Thorndon Arts Residencies – the Lilburn Residence, the Rita Angus Cottage and the Randell Cottage – opened their doors to well over a hundred visitors who enjoyed readings from Randell writers (and writers we consider friends!), music and art.

A view from inside the cottage.

A blackbird eyes the crowd.

The Ambassador of France, Her Excellency Sylvaine La Carta Vert dropped in to say hello. Here she is with our excellent writers Fiona Kidman and Paddy Richardson. (Photo: Gordon Stewart)

Anna Jackson and Luc Arnault read ‘At the Bay’ and Anna’s own poetry in English and in French translation.

Fiona Kidman reads from her poetry collection ‘Where Your Left hand rests’.

A poet laughs in the sun!

Resident Paddy Richardson reads from her work in Progress ‘The Green of the Spring’, set during WW1. Her musician husband, Jim Mackay, accompanied the reading with tunes from the era.

The evening of 27 March may well have been a dark and stormy night but the atmosphere inside the National was warm and welcoming, as current resident Karin Serres gave her audience an insight into her creative process, her information gathering (and magpie tendencies) and her journey from theatre to literature.

Karin’s next event in Wellington will be at the Alliance Française on 9 May. Details to follow.

Notes and images towards a flash fiction on dive bombing n Wellington Harbour. 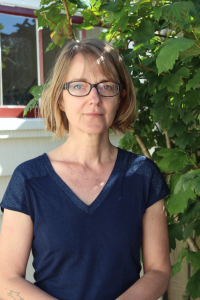 A scenographer by training, the Randell Cottage’s 2019 French resident is Karin Serres whose work traverses many genres – novels, picture books, plays, for stage and radio, and translation.

Join us for an evening of conversation, readings and reflection on the new perspectives that come from writing away from home on Wednesday 27 March at the National Library.

Oh! We don’t envy the judges of this year’s Ockham New Zealand Book Awards – but we are delighted to see three members of the Randell Cottage Writers Trust family included in the longlist for best novels. They are Trustee emerita Fiona Kidman for This Mortal Boy (Penguin Random House), Tina Makereti for The Imaginary Lives of James Pōneke(Penguin Random House) and Vincent O’Sullivan for All This by Chance(Victoria University Press).

A scenographer by training, Karin Serres, the Randell Cottage’s 2019 French resident is a novelist, a playwright, for stage and radio, and a translator. She writes for general and YA audiences and will be in Wellington till late June. Her Randell project is a sequel to her 2018 novel, Happa no ko le peuple de feuilles (Happa no ko the leaf people).

Dunedin-based writer Paddy Richardson is to be the 2019 Creative New Zealand Randell Cottage Writing Fellow. Richardson has published seven novels and two short story collections. Her Randell project, The Green of Spring is the sequel to her 2017 novel Through the Lonesome Dark. Set in WWI New Zealand, it tells the story of young mining activist Otto Bader who is arrested as an ‘enemy alien’ and incarcerated on Somes Island along with others of Austrian and German origins.

Selection panel convener Stephen Stratford says “Many of us wanted to know what happened next for the characters in Through the Lonesome Dark, longlisted for the 2019 Dublin Literary Award, which is right up there with the Booker. For the sequel, Paddy will be able to research the Turnbull Library’s holding of letters and diaries of Somes Island inmates. A perfect synchronicity of project and residency.”

Richardson says she is delighted to be the 2019 resident and is looking forward to her six months in the capital.

The Randell Cottage Writers Trust was established in 2002.  The restored Category II historic building, gifted to the Trust by the Price family, hosts two writers a year; one from New Zealand and the other from France. It is currently home to Christchurch writer James Norcliffe. The 2019 French resident, novelist and dramatist Karin Serres arrives in Wellington in late January 2019. 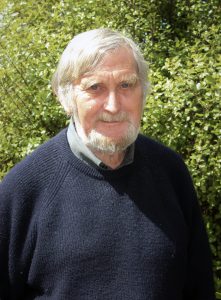 We finish the year with a presentation from our current resident, James Norcliffe, at the National Library on Thursday 6 December, from 12:10 to 1:00 pm.

James wears a number of writing hats. He is a children’s writer, poet, editor, teacher of creative writing and promoter of poetry in Christchurch. Apart from a collection of short stories set in China, The Chinese Interpreter, and a few other short stories, he has rarely written fiction for adults. Hie time in the Randell Cottage has given him the opportunity to write a novel for grown ups.

His wide-ranging talk will include readings from recent published work and background on how the pieces came about and then – braving the superstition regarding talk of work in progress – he will discuss The Frog Prince, his current Randell Cottage project.

Admission: free, although koha is appreciated as a contribution to the maintenance of the historic Randell Cottage.