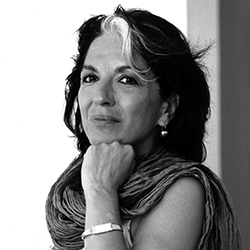 Fariba Hachtroudi is a French writer and Iranian exile born in Tehran in 1951, and the daughter of the eminent mathematician and champion of democracy Moschen Hachtroudi. She studied art and archaeology in France, moving there when she was a teenager. Despite the distance from her homeland, the Islamic revolution in Iran left her feeling bewildered. In 1981, she decided to move to Sri Lanka where she taught at Colombo University.

When Hachtroudi returned to France in 1983, she denounced Khomeini’s regime in newspaper articles. This earned her a fatwa which called for her death. In 1985, she illegally entered Iran, a journey she described in L’Exilée (published by Payot in 1985), and she became reconciled with her homeland. She found a country at war, struggling with intolerance and obscurantism. Fariba Hachtroudi wrote several novels, essays and articles “to exorcise this reality”. She led the humanitarian association MoHa, and was active within the National Council of Resistance of Iran.

Since 1990, Hachtroudi has been working with the photographer Laurent Péters; they jointly won the Sicilian Cultural Report prize in 2002. Fariba Hachtroudi works around the world as a writer, a journalist, and a lecturer. Among her recent works are Le douxième imam est une femme (published by Nouveaux Loisirs, 2009); Khomeyni express (Xenia, 2009); A mon retour d’Iran (Seuil, 2008); J’ai épousé Johnny à Notre-Dame de Sion (Seuil, 2006).