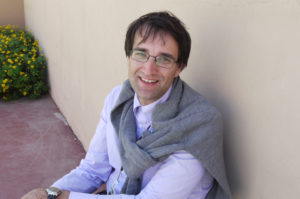 The 2017 French resident at Randell Cottage is Josef Schovanec, writer, polyglot and activist for autistic people who has published four books including Voyages en Autistan – Travels in Autistan (Plon, Paris) and Je Suis à l’Est !, the first memoir by an autistic person to be released by a major French publisher. His Randell Cottage book project focusses on developing a fictional narrative based on the story of an autistic friend’s journeys and research in the Pacific.

Josef Schovanec is also a weekly guest on radio stations Europe 1 (France) and la Première (RTBF, Belgium). In 2016, he was appointed as an advisor to the French Secretary of State for Disabled People and the Fight Against Exclusion.

Josef Shovanec will arrive in Wellington in mid-January 2017 for five months. While in New Zealand, he will work on his next book and will travel on a speaking tour throughout the country.