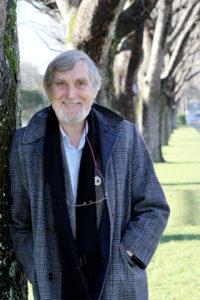 Selection panel convener Stephen Stratford says “James Norcliffe is a much-admired poet, YA author and short-story writer. For his first adult novel, he plans a high-concept retelling of the Frog Prince fairytale we all know from the Brothers Grimm version, this time in two timelines and settings. This is the value of a residential fellowship like the Randell Cottage, to enable an author to have the luxury of ‘sailing in a new direction’.

“We look forward to welcoming James to the cottage,” Stratford said.

Norcliffe says he is delighted to be the 2018 resident and is looking forward to his six months in the capital. “I’m very grateful for the chance to work on my project especially in the stimulating environment of Wellington. It’s a city I love not only for its beauty but for its energy, its fizziness. I do hope that this energy informs my novel. The Randell Cottage sounds a perfect place to work on it.”

The Randell Cottage Writers Trust was established in 2002.  The restored
B-category historic building, gifted to the Trust by the Price family, hosts two writers a year; one from New Zealand and the other from France.  It is currently home to Stephen Daisley.