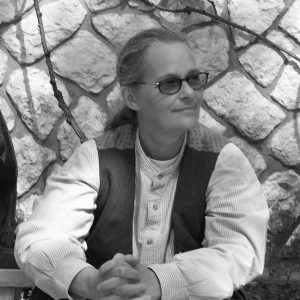 Jennifer Compton was born in Wellington, New Zealand in 1949 and had two poems published in the NZ Listener when she was 15. In 1972 she travelled to Sydney, Australia with her husband Matthew O’Sullivan and attended the Playwrights’ Studio at NIDA. The play she wrote for this course, Crossfire, jointly won the Newcastle Playwriting Competition in 1974 and premiered at the Nimrod Theatre in Sydney and was published by Currency Press. The play was presented by Downstage Theatre in Wellington in the late 70s.

Before her two children were born, in 1983 and 1984, she flew backwards and forwards across the Tasman and worked in both countries. For instance, her radio plays (A Wigwam For A Goose’s Bridle, Morning Glories, Several Local Dandelions) were produced by the ABC and RNZ. And she won the Bank of NZ Katherine Mansfield Award in 1977 for her story The Man Who Died Twice.

Then she moved with her family to Wingello, a small town on the Southern Highlands of NSW, and concentrated on writing poetry and short prose.

In 1995, her poem Blue Leaves won the Robert Harris Poetry Prize and she was awarded the NSW Ministry For The Arts Fellowship, the first time this had been awarded for poetry. During her Fellowship year she wrote a book of poetry, Blue, which was shortlisted for the NSW Premier’s Prize, and a stage play, The Big Picture, which premiered at the Griffin Theatre in Sydney and was published by Currency Press. It was performed by Circa Theatre in Wellington in the late 1990’s.

Her book of poetry, Parker & Quink, was published by Ginninderra Press in 2005 and her next book of poetry, Barefoot, is ready to go. A book of reflections about travel and place – The Wrong Side Of The Road – is nearly complete. In 2006 she was resident in the Whiting Library Studio in Rome from February to July. And in 2007 she spent a month as a Creative Writing Fellow at the Liguria Study Centre in Bogliasco.

In 2008 she is happily ensconced at the Randell Cottage working on her novel which is set in the Wairarapa and is called All The Time In The World.