In late June, we were delighted to be able to welcome our 2020 resident Michalia Arathimos, her partner and two young children to Te Whanganui-a-Tara Wellington. We asked her to share some early impressions of living and working in Randell Cottage. 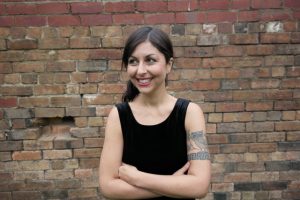 The novel I am working on at Randell Cottage is called Cartographia. Central to this story are the notions of leaving and returning, of flight and of landing. Central also to this work is an awareness of the fragility of the idea of ‘home’: how the idea of home may be carried within oneself, or made up in the first place, or imposed upon landscapes over other peoples’ ideas of home. Ξενιτιά, or xenitia, is a feeling common in the Greek diaspora, a feeling of being in exile, or of longing for ‘home’. But the real meaning of xenitia is untranslatable. It’s can be a longing for a home that no longer exists, or which perhaps never existed in the first place.

I arrived back in my hometown of Wellington from Australia on the other side of considerably more strife than I had counted on experiencing. Due to leave in July with our whānau to take up this residency, we made the decision to come home early. Details of our journey may be found here (‘On kindness, on ignorance’ essay). When we moved into Randell Cottage it was with a great sense of gratitude and homecoming. But I could not have guessed how the backdrop of the cottage and its history would work their way into Cartographia.

Randell Cottage history is preserved in the walls. In several rooms in the house glass has been installed over past layers of wallpaper and framed, so you can trace the layers back to the original wood. A small museum encases marbles, pudding dollies, and a homemade top, which would have been the original Randell childrens’ toys. My children study these with fascination, and my four year old tells me over and over: ‘They had ten children here!’ The attitude of the Trust and conservators is one of gentle but not fussy preservation. Cartographia is about peeling back the layers of a place and a history and exposing what is underneath. I am beginning to think of the project as a piece of glass, which this place is helping me to polish.

This week I walked through the Bolton Street Cemetery for the first time. A Trust member had told me that William Randell and other family members were buried there. I was hurrying and it began to rain, and it seemed the Randells inhabited a modest grave, and no directions were apparent. The graveyard was large. It began to pour. I tried to cut through the bush down onto Tinakori road, but all the paths led nowhere. Lost, and quite soaked, I found myself in an obscure area of the graveyard, trying to find my way back to the main route, when I stumbled right on them: the Randells.

I told them we loved the house that William built with his own hands. Soaked and ridiculous, I congratulated them on raising kids who had kids who would be patrons of the arts. As a child of migrants I feel an odd affinity for this family, who turned up on the shores of Te Whanganui-a-Tara, traveling, as we did, through Melbourne in Victoria. These Randells arrived on the shore in the wake of a massive earthquake, which had caused a refugee encampment on the beach. We arrived in the midst of a global pandemic.

There would seem to be no better place to interrogate the notion of ‘home’ than right here, in the Cottage, in the spirit of creative excavation.