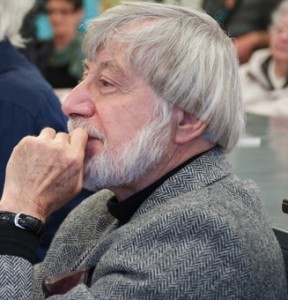 Our 2004 resident Michael Harlow is a poet, publisher and librettist. Born in the United States, with Greek and Ukrainian heritage, he settled in New Zealand in 1968. Michael has been editor of the Caxton Press poetry series and poetry editor of Landfall. He’s also been a recipient of the Katherine Mansfield Fellowship and in March 2014 was presented with the 2014 Lauris Edmond Memorial Award for Distinguished Contribution to Poetry in New Zealand.

Have you ever noticed?
Always there’s a pair
of them together; ring-collar
doves, even when they’re
flying switchback from tree
to tree, daubs of colour
in a toss of light, you can’t
tell which one is following
the other. Have you listened
to them singing their hearts
out under the parasols of trees?
I swear you never know
when one song begins
and the other one ends.
You might say–they have an
arrangement: one long song
for two voices: they are calling
down the lost noises of the sun
and clearly–this ‘magic study
of happiness that no one eludes’.