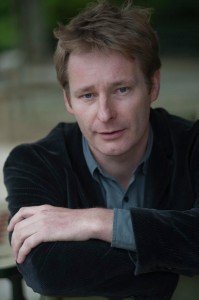 The Randell Cottage welcomes the 2015 French writer-in-residence, David Fauquemberg. David lives in the Cotentin area of Normandy, France. He’s a novelist who has also published in magazines such as XXI, Géo and Long Cours and is a translator from English of Nadine Gordimer, R. L. Stevenson, James Meek, Willy Vlautin and other fiction writers.

David has travelled in Patagonia and Lapland, sailed across the Atlantic, and lived with gypsies in Andalucia. His first novel, Nullarbor (Hoëbeke, 2007), was inspired by two years in Australia and won the Nicolas Bouvier Prize for travel writing. Mal tiempo (Fayard, 2009), which has a boxing theme and is set in Cuba, was awarded the Millepages Prize, the Prix des Hebdos en Région Prize and the City of Caen Prize. His most recent novel Manuel el Negro, published by Fayard in 2013, is the result of his time with Andalucia’s flamenco gypsies.

You can listen to the Radio NZ interview with David Fauquemberg here: