Writers Owen Marshall and Lawrence Patchett will address these – and other – questions in in an evening of discussion and readings at the National Library on 2 December 2015.

Timaru-based Owen Marshall is regarded as a master of the short story. He is currently writer in residence at the Randell Cottage in Thorndon. He is a prolific writer and editor of short stories, poetry and novels who has held fellowships at the universities of Canterbury and Otago and in Menton, France. He is an adjunct professor at the University of Canterbury, which awarded him the honorary degree of Doctor of Letters in 2002. His work has seen him honoured with some of New Zealand’s top literary awards, including the 2013 Prime Minister’s Award for Literary Achievement in fiction. In 2000 he became an Officer of the New Zealand Order of Merit for services to literature and in 2012, a Companion of the New Zealand Order of Merit.

Lawrence Patchett is the author of I Got His Blood On Me: Frontier Tales, a book of short stories. His fiction has been recognised in the New Zealand Post Awards (NZSA Hubert Church Award for Best First Book of Fiction), and the Long and the Short of It Short Story Competition (long section). His work has also appeared in Sport, Landfall, Dominion Post, Hue & Cry, Turbine, and on Radio New Zealand National. He has a PhD in creative writing from Victoria University, and lives in Raumati Beach. He is currently working on a dystopian adventure novel set in the North Island of New Zealand.

The event is being held under the auspices of the Friends of the Randell Cottage and the National Library of New Zealand, as part of the Library’s fiftieth anniversary celebrations.

RSVP: by email to events.natlib@dia.govt.nz with the words Owen Marshall in the subject line. (Note seating is limited to 120.)

Readers are our current writer in residence and writers who are Randell Trustees & Friends Committee members. AGM business will be brief. 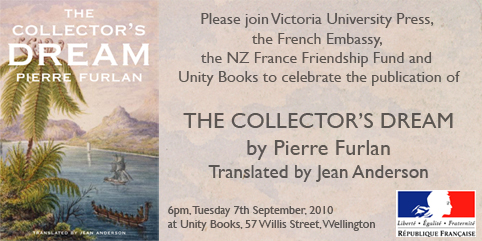 Sunday 16 May, Pat White was interviewed on Radio NZ National’s Arts on Sunday hosted by Lynn Freeman (midday to 4 pm).

Pat White’s poem Where the Night is Long is part of the Tuesday Poem blog.

New Zealand writer Pat White started a six month term as writer in residence at Wellington’s Randell Cottage last week. Pat White says he is delighted to be living in Thorndon, so close to the natural walking areas of both the Botanic Gardens and Town Belt.

‘The cottage is very close quality libraries, including the Turnbull Library,’ he says,’ which will be useful for my research on Peter Hooper.’

White is using his term as the Creative New Zealand Randell Cottage writer to work on a biography of Peter Hooper (1919–1991). A West Coast writer, teacher and fellow environmentalist, Hooper wrote award-winning fiction, as well as poetry and non-fiction.

White himself is also an accomplished poet and will give two poetry readings during May:

White has also produced the paintings and sculpture for an exhibition and catalogue Gallipoli: In search of a family story, which has already been shown five times in the North Island and may appear again at the Waiouru Army Museum this August. White was recently writer in residence at the Robert Lord Cottage in Dunedin, and he completed an MA in Creative Writing at the International Institute of Modern Letters last year. 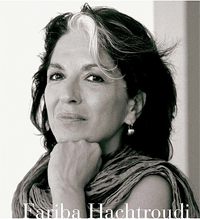 Randell Cottage hosted a very successful Open Day on Tulip Sunday this year. Over 60 people came through the cottage and talked with Trustees and Friends about its history and its current use as a writers’ residency.

The visitors ranged from an intrepid Beagle who dragged his owners in the door to a young boy and his mother who were fascinated by the Shacklock range to a couple who renovated old cottages and were delighted to walk through a prime example of ‘stripped down colonial Georgian’.

There were the usual writers interested in a place for writers to write, and those who just happened by after enjoying the tulips. The gorgeous posters organised by Friend of the cottage, Maggie Rainey-Smith and printed by Apex, seemed to attract a great deal of interest. The Trustees and Friends of the cottage had as much fun as the visitors.

We finished up with drinks which representatives from the French Embassy and the Lilburn House attended, as well as Susan Price whose family gifted the cottage to the Trust. 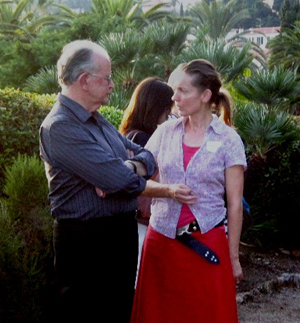 Randell Cottage Trustee and author Vincent O’Sullivan and recently departed Randell Cottage writer in residence Kirsty Gunn in conversation in the garden of the Villa Maria Serena in Menton. Both were keynote speakers at the Katherine Mansfield symposium ‘Celebrating Katherine Mansfield’ in Menton in September. A summary of Kirsty’s talk is here. Photo: Delia da Sousa Correa

‘Thorndon – with its houses and hills, its glimpses of the harbour and its walks and ways – stamped Katherine Mansfield‘s imagination and made the remembering of it a sort of literary project that continued throughout her life. This informal talk will show how that early world of hers has come to surround me during this past winter I have spent living just up the road from where she was born and brought up, and will describe how Mansfield‘s sense of home and away that has always been a great inspiration upon my own writing has actively come to bear upon the work that I have made while I have been here as a Randell resident. I will read one of the short stories I‘ve written while here – ‘The Little House’ – and discuss my own literary project, a collection of journal entries, essays and short stories entitled —Thorndon — all centred around this very particular part of the world. ‘

Kirsty Gunn is currently in residence at the Randell Cottage with her two daughters who are attending Queen Margaret’s College. She will be joined for a short period by her husband David Graham who is Managing Director of Granta.

Kirsty is researching her project on Katherine Mansfield called Thorndon and working on a collection of short stories. Kirsty was guest speaker at a NZ Society of Authors event at the Thistle Inn in Thorndon on May 25 and spoke about Necessary Scenes in Fiction. She has also spoken to a Writers Master Class at the International Institute of Modern Letters on June 3 at Victoria University.

Kirsty spoke at the Writers on Monday series 12.15-1.15 pm August 3 at Te Papa, the Writers Read series 6-7 pm Thursday August 6 at Massey University’s Wellington Campus, Buckle Street, and at Palmerston North City Library 7 pm Friday August 7. Randell Cottage Trustee Mary McCallum will chair the Massey and Palmerston North events.
After arriving in New Zealand, Kirsty Gunn had to return briefly to Scotland for family reasons which meant she had to regretfully cancel her events at the Auckland Writers and Readers Festival in May.