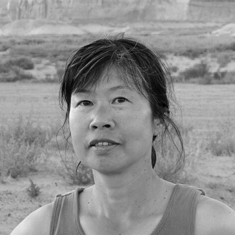 Thanh-Van Tran-Nhut was born in Hue, Viet-Nam, in 1962. Her family moved to the US in 1968, then three years later moved to France. After finishing high school in France, she went back to the US to attend university. Thanh-Van earned a BA in Math and Physics from Whitman College and a BS in Mechanical Engineering from the California Institute of Technology.

She worked several years in France before starting to write, with her sister Kim, the story of a detective, Mandarin Tan, set in 17th century Viet-Nam. They wrote two novels together before Tanh-Van kept the series going on her own. It proved successful and several of the books have been translated into Italian, Japanese, Spanish, Russian and German.

Thanh-Van’s Randell project ‘Kawekaweau’ (Au Vent des Iles, 2017) is the story of a scientist who receives a package and a challenge from a former girlfriend: his task? to unravel the engima of the kawekaweau, the giant gecko of Maori myth.