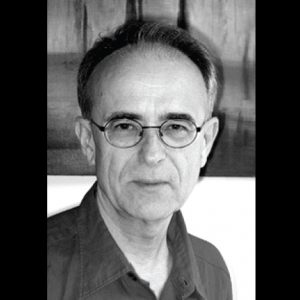 Pierre Furlan (1943- ) was born in southwestern France in 1943, he spent his adolescence in California and studied at UC Berkeley. He then settled permanently in Paris. Furlan is the author of five books of fiction and is also well known as a literary translator. It is in fact by translating three contemporary New Zealand writers — first Alan Duff, then Elizabeth Knox and Geoff Cush — that he established the special link that brought him to New Zealand. Pierre Furlan’s writing thrives on the gap between fantasy and reality, questioning the familiarity of our everyday world, as evidenced in his book of stories L’Atelier de Barbe-bleue (Bluebeard’s Workshop, 2002).

Furlan is also interested in the theater. He has written radio plays and was a theater critic for seven years. But he seems to have an even closer tie to the visual arts. Two of his books came out in limited editions illustrated by the Belgian artist Alain Petre, and the figure of the great Swiss painter Louis Soutter looms large in three of his fiction works, especially in the novel La Tentation Américaine (Actes Sud, 1993) and the short story Le Violon de Soutter (Esperluète, 2003).