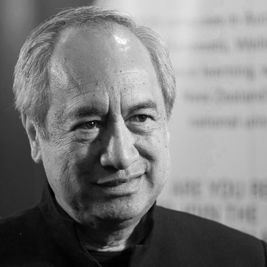 Witi Ihimaera is a novelist, short story writer, anthologist and librettist, was born in Gisborne. He is of Te Whanau A Kai and Ngati Porou descent with close affiliations to Te Aitanga A Mahaki, Rongowhakaata, Tūhoe, Te Whakatohea, Te Whanau-a-Apanui and Ngati Kahungunu. His works include Tangi, The Matriarch, The Whale Rider, (which was made in to a film by Niki Caro in 2002), the semi-autobiographical Nights in the Gardens of Spain, and The Parihaka Woman. A memoir, Maori Boy has just been released by Random House. Ihimaera became a Distinguished Companion of the New Zealand Order of Merit in 2004, for services to literature.
Ihimaera used his time at the Randell Cottage to work on a second volume of his three-volume memoir Native Son, covering the period 1961 to 1990, a trajectory that sets his life against national and international history, delineating the professional dilemmas as well as the personal. The residency enabled him to consult his own archives at the J.B. Beaglehole Room and also the Foreign Affairs archives at the National Library.