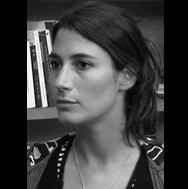 Estelle Nollet was born in 1978 in the Central African Republic and moved to France a few years later. Following her studies as a graphic artist in Paris, she worked in advertising in France and elsewhere, before taking up a second career as a diver and working as an instructor in a number of countries (Australia, the US, New Zealand, Mexico…). She says diving into the world of silence is like discovering a book in movement where there’s a new story happening mutely every second.

Estelle has published two novels, both with major publishing house Albin Michel. Her first, On ne boit pas les rats kangourous (2009) (You don’t drink kangaroo rats), is set in Australia, where she has travelled. It has been compared to the work of Cormac MacCarthy, and was awarded several prizes for emerging novelists.

The second novel, Le bon, la brute, etc (2011) (The good man, the brute, etc) took ou the Prix Gironde (for ‘new writing’) and is described as an international road-movie novel.

Estelle Nollet plans to write at the cottage for four months, from January to early May 2013.